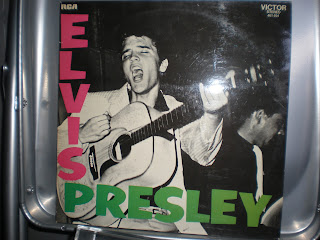 I picked this up from a barman at what used to be my local who was getting rid of all his records and emigrating - can't remember where or whether the two facts were related - but it must have been a pretty dire state of affairs if he was desperate enough to ditch his Elvis. Anyway, this was the only thing I bought from him - 50p or a pound at most I seem to recall - and I only really bought this for the cover really, not even having a turntable set up at the time having long been duped like many a music lover by the myth of digital supremacy. But such was the power of this iconic sleeve that, flipping disinterestedly through a near strangers record collection, my hand performed the same instinctive grab to the bosom that they do nowadays, as it did just the other day, when for instance, I came across 5 green-sleeved Parlophone Beatles singles in the local PAWS shop. For this is the mother-lode. Even in its mock stereo-fied, fancy 70s French pressing form, this is a piece of history. 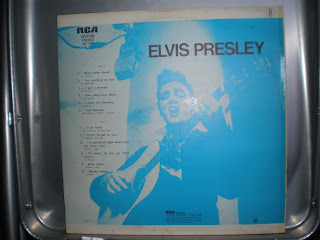 An original 50s British version of this album (on HMV) briefly passed through my hands in the 1980s - just long enough for me to make a crappy tape copy on the terrible hand me down music centre I had at the time. I'd been allowed to borrow it on pain of death by its owner, a charming old cove I came across whilst working for the local council. It was back in the days when the pubs used to close on Sunday afternoons - that brief hiatus was the duration of my custody of that lovely old relic. I can't even recall the bloke's name now, but he was an old beatnik-jazz-hipster who'd retained his period Abe Lincoln beard and love of music. He would regale me with tales of his youth; how he'd keep the same glass throughout a night's drinking because they used to wash them in soapy water and if you persevered with your original receptacle, by the end of the evening you might just be able to taste the beer and not the soap; how he'd use the hand grips in the back of his old Wolsey as hoists for his floozy's stilettos as they gamely attempted a cramped and hurried knee-trembler on the back seat; how neither he nor any of his mates had ever heard anything the like of what Scotty Moore was playing during the solo on 'Shake, Rattle and Roll'. And neither have I, even now. Nice chap. Until he ran off with my copy of  'Beggar's Banquet'...

This was a tough one to pare down to just one side; I've sadly overlooked the worthy claims of 'Blue suede shoes' and this blog's namesake and plumped for 'Face deux'... 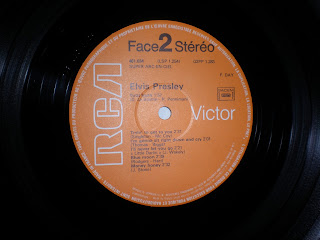 I hope you'll agree that this 14 min 25 secs is a pretty good encapsulation of what made early Elvis so earth shatteringly powerful. He can almost match Little Richard's madcap energy on 'Tutti Frutti' and makes a country/gospel/swing fusion on 'Tryin' to get to you' that no one else would have dared to attempt, even if they'd ever have been capable of the idea in the first place- and somehow it works. 'I'm gonna sit right down and cry over you' and 'Money honey' have some of Scotty Moore's snappiest solo playing. And then there are the two spectral ballads - 'Blue Moon' and 'I'll never let you go'. 'Blue moon' sounds so unlike anything anyone else had ever sounded like before that the effect on its original audience must have been positively extra-terrestrial; Elvis a weird, wavering, bongo playing interplanetary ghoul floating haunted and despairing over the prairie. It's the seed of Ziggy Stardust - and so much else. It's the same alchemy that transforms one person's sense of oddness and out of placeness into timeless art. And the rocky bit at the end of 'I'll never let you go' sends me every time.That 'We-eeee-llll" sounds astonishing, even in the faux stereo they deemed necessary to inflict on these priceless monaural recordings back in the 1970s. To be honest, it doesn't do them any harm. The effect is barely noticeable in the room and you'll only be aware of a slight reverb effect to the far end of the stereo spectrum - presumably it's meant to add a feeling of width. But the music still cuts through any processing you can throw at it- whether smart and sassy, fevered and sensual or languid and lonesome. And there's detail too - you can even hear the the whirr and hum of the tape player that's generating the delay that gives Presley's voice that disembodied, alien feel on 'Blue moon'.

A note on the transfer: as with yesterday's Moody Blues offering, there's been no audio editing whatsoever to remove scratches or extraneous surface noise etc. (In fact, I don't think I even *cleaned* either of these properly, just a wipe with the anti-static brush.) The only thing I have done is to boost the volume slightly. I think this may have led to a slight whirring effect only noticeable at the beginning and end of some of the tracks. I may stop doing even this as the audio is usually pretty strong in the first place. We'll see. Equipment used: Rega P3 turntable, Project II phono stage, Cambridge Azur amplifier, Behringer UCA202 audio interface (they're 20 quid or so), HP Pavilion laptop. Hardly Dr. Ebbetts, but I think they sound OK...

3. I'm Gonna Sit Right Down and Cry Over You

Blanche Librarian
Vinyl addict, reappraising her collection a side at a time...